What We Know So Far

Now that the bubble of anticipation surrounding the mid-engine Corvette has burst, excitement is building for the even-mightier Z06 model. With an exotic flat-plane-crank V-8 engine, the 2022 Chevy Corvette Z06 will sound unlike any Vette that's come before. It'll also look meaner than the mainstream C8 thanks to flared fenders, larger air scoops, and aerodynamic addendum that actively adjusts to maximize high-speed downforce and cornering traction. Along with its exclusive powertrain and enhanced appearance, the super Chevy will inherit all the best features and technology from the regular model. Although we still don't have all the juicy details about the new Z06, here's what we know so far.

The first mid-engine Corvette Z06 is expected to go on sale in early 2021 as a 2022 model. As is tradition, it's a more hardcore, track-focused version of the standard Vette, complete with bolder styling cues and serious performance attributes.

Pricing and Which One to Buy

It should make sense that, since Chevy hasn't officially revealed the new Corvette Z06, we can only speculate on how much it'll cost. Its front-engine predecessor started at about $25,000 more than the base model, so we think it's safe to add that number to the starting price of the 2020 Corvette, which starts at $59,995. That means the 2022 Z06 should open at around $85,000 when it eventually goes on sale.

The upcoming Corvette Z06 will receive a special engine that should make it sound similar to the supercars it's trying to dethrone. The naturally aspirated 5.5-liter V-8 features a flat-plane crank, which means it should rev to between 8500 and 9000 rpm. This engine is expected to make over 600 horsepower, and it's Ferrari-like howl is all but guaranteed to send shivers down the spine of bystanders. The unconventional V-8 will hook up to an eight-speed dual-clutch automatic transmission and rear-wheel drive. Considering that the 495-hp 2020 Corvette Z51 we tested rocketed from zero to 60 mph in just 2.8 seconds and completed the standing quarter-mile in 11.2 seconds at 122 mph, the Z06 will be even quicker in a straight line. A set of wider, stickier tires and more powerful brakes will help it corner harder and stop shorter than the regular Vette, too. Chevy will also strengthen the structure and recalibrate the suspension tune on the Z06 to help make sure its performance advantages are most obvious at the racetrack. A host of active aerodynamics that automatically adjust to optimize downforce will join the party for this new generation. We'll have to wait until we get our hands on one to evaluate how its myriad improvements compare with the outgoing Corvette Z06. 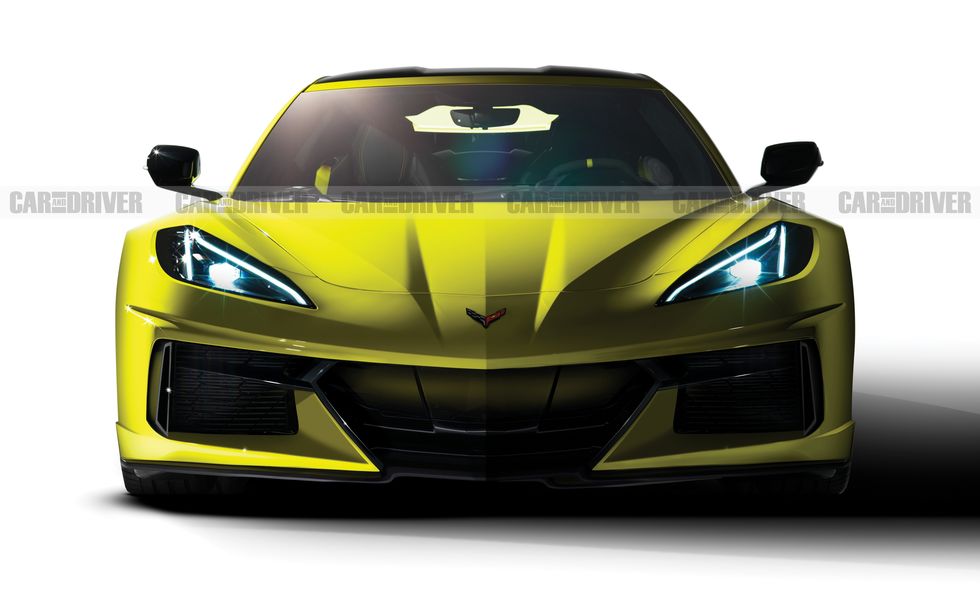 C8 Corvette Z06 Will Have a Ferrari-Like Shriek

Neither Chevy nor the EPA have indicated how efficient—or inefficient—the 2022 Corvette Z06 will be in the city and on the highway. Since the company's flat-plane-crank V-8 is currently only found in the Corvette C8.R race car, we don't have any government ratings for comparison. Once the Z06's fuel-economy figures are released, and we have the opportunity to test one on our 75-mph highway route, we can evaluate its real-world mpg.

The Bow Tie brand went above and beyond to ensure that the mid-engine Corvette's interior could not be called boring. While the design certainly transcends what's found on every other Chevy model, the square steering wheel and wall of climate-control buttons on the center console are unusual elements, to say the least. Still, the cabin layout caters to the driver, and the list of standard and optional features is extensive. This includes a 12.0-inch fully digital gauge cluster, a head-up display, heated and ventilated seats, and wireless charging. All of this and more will continue inside the new Z06. We expect its track-worthiness to be made apparent through additional carbon-fiber and microsuede interior accents as well as a set of even more aggressively bolstered seats. The Corvette's capacious rear trunk should continue to provide a spot for drivers to carry two sets of golf clubs.

Cooked into the Corvette's multilayered dashboard is an 8.0-inch touchscreen that supports Chevy's Infotainment 3 Plus system. While we've only had minimal exposure to this specific setup, we found it to be mostly intuitive and responsive. We're confident the Z06 will share the same interface and features, which include Apple CarPlay, Android Auto, and a Wi-Fi hotspot. Likewise, two separate Bose stereos are expected to be offered: a standard 10-speaker system and an optional 14-speaker setup. The new Z06 will continue to offer the Performance Data Recorder, which allows you to record video of everything from your track exploits to relaxed country-road cruises. And if you dare leave your Z06 with a valet, there's a setting that keeps track of any nefarious activities the car-parker might try.

The 2022 Corvette Z06 hasn't been crash tested by the National Highway Traffic Safety Administration (NHTSA) or the Insurance Institute for Highway Safety (IIHS). While the regular C8 Corvette only has a handful a driver-assistance technology, such as blind-spot monitoring and rear cross-traffic alert, we expect those features to be available on the Z06.

Chevy provides all of its models with a middle-of-the-road limited and powertrain warranty. While the company offers more complimentary maintenance than automakers who skip the free service altogether, it's one of the shortest such plans in the industry.

Complimentary maintenance is covered for the first visit